The collection “Mode of City” is inspired by the tradition of wardrobe dresses, which were the transition dresses from folk clothing to urban fashion. Also, it is nice to think that despite the changing roles of folk and modern clothing over time, a dialogue between them is constantly being re-established.
In the collection, textile and silver merge into one organic whole, while the silver chain net imitates fabric and lace. Silver has a symbolic and traditional meaning – it is a symbol of wealth. The fabrics used are greatly traditional: linen and cotton. The holes in the silver net draw attention to the fact that until recently the garment did not lose its meaning and value after becoming worn, instead, it was repaired and continued to be used.Grete Küppar & Maarja Palu 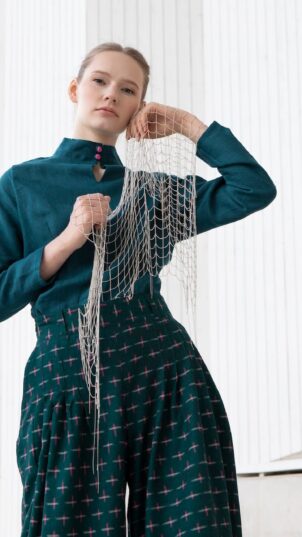