“Locus Solus” collection was made out of a need to create weird, fantastic things. Sometimes, I perceive reality as very unreal and strange. I worked on this collection during the pandemic while I was living next to the Polish parliament building. That was a very unusual time because of the women’s strikes in Poland.
Every day I was surrounded by police cars and demonstration tents. I decided to escape into the world of imagination and made the Locus Solus costumes.
The collection is inspired by Raymond Russell’s book, Locus Solus. It’s a surrealist novel written in 1914 in France. All the collection’s sets were made for the characters from the book. The collection includes six sets and two installations, and one of them is designed for three people. In my collection, I used materials that I designed and prepared myself, for example in the female figure. I also used elements that have a symbolic
character, like dried grass in the umbrella and wind chimes in the female hat, as they describe the history and personality of the book’s characters. The design decisions that I made were inspired by the grotesque climate of the book. 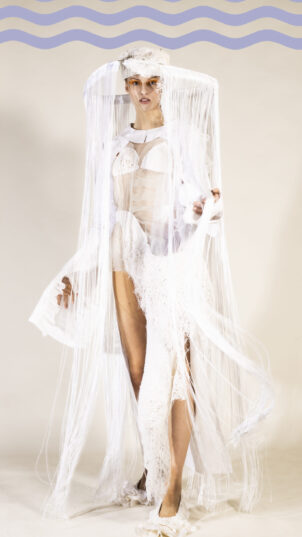